Colin O’Brady knows no fear and limitations are meant to be challenged and broken. He’s an explorer, an adventurer, triathlete, author and inspiring speaker. His book, The Impossible First: From Fire to Ice – Crossing Antarctica Alone, is a New York Times bestseller.

If there is a mountain that needs climbing, a massive slab of ice that needs crossing, or a dangerous water passage to traverse, Colin O’Brady is your guy. He’s an explorer, an adventurer, triathlete, author and inspiring speaker.

His book, The Impossible First: From Fire to Ice – Crossing Antarctica Alone, is his story of how he solo-walked 932 miles across Antarctica pulling a sled filled with food that started out weighing 375 pounds. He survived sub-zero temperatures, whiteouts, and two months all alone in the wilderness.

At the time, he was the first to accomplish that feat. Just 10 years before that trek, doctors told him he may never walk again due to the scar tissue on his legs from second-degree burns on his legs.

It was his mother’s encouragement to pick a goal, not an end, which brought him out of a slump and back to his feet.

When he’s not using his energy on adventures, he uses it on stage in speaking engagements.

In addition to climbing the highest point in every state of America, he accomplished another impossible achievement and another first. Returning to the Antarctica region to the place where the Pacific, Atlantic and Southern oceans meet, O’Brady and a crew of five rowed a boat across what is considered the most dangerous stretch of water in the world, Drake Passage. Located between Cape Horn in South America and the South Shetland Islands of Antarctica, currents are unpredictable and water swells reach 50 feet.

O’Brady was born on a commune, raised in Portland, Oregon, and was a youth soccer star and a state champion swimmer. He was recruited by Yale University for the swimming team and graduated in 2006 with a Bachelor of Arts in Economics.

Get ready to join Colin in conversation, Thursday, July 16. 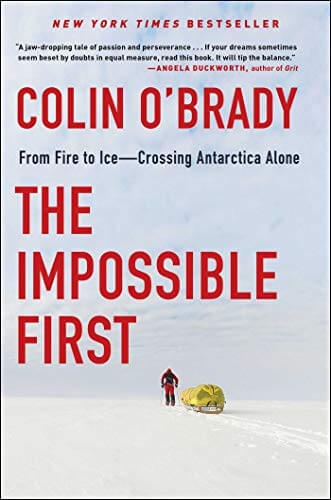